Welcome to this month’s edition of Recent Reads!

– Although he faces responsibility bravely, thirteen-year-old Matt is more than a little apprehensive when his father leaves him alone to guard their new cabin in the wilderness. When a renegade white stranger steals his gun, Matt realizes he has no way to shoot game or to protect himself. When Matt meets Attean, a boy in the Beaver clan, he begins to better understand their way of life and their growing problem in adapting to the white man and the changing frontier.
Note from me: My kids loved this book. Great adventure, a little danger and themes of understanding people different from ourselves.

Edge of Eternity: Book Three of The Century Trilogy

: Ken Follett’s Century Trilogy follows the fortunes of five intertwined families—American, German, Russian, English, and Welsh—as they make their way through the twentieth century. Edge of  Eternity, the finale, covers one of the most tumultuous eras of all: the 1960s through the 1980s, encompassing civil rights, assassinations, Vietnam, the Berlin Wall, the Cuban Missile Crisis, presidential impeachment, revolution—and rock and roll.
Note from me: I thoroughly enjoyed the first two books of this series, which covered WWI and WWII,  but I did not care for this final chapter of the series. I felt it was gratuitous sexually and the “history” had a worldview slant that I didn’t notice in the other two books. For me, a highly disappointing ending to the trilogy. 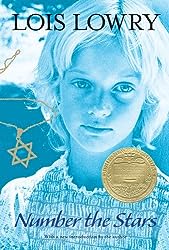 : As the German troops begin their campaign to “relocate” all the Jews of Denmark, Annemarie Johansen’s family takes in Annemarie’s best friend, Ellen Rosen, and conceals her as part of the family.

Through the eyes of ten-year-old Annemarie, we watch as the Danish Resistance smuggles almost the entire Jewish population of Denmark, nearly seven thousand people, across the sea to Sweden. The heroism of an entire nation reminds us that there was pride and human decency in the world even during a time of terror and war. *Challenge required reading.
Note from me: The lead character is 10 years old, close in age to my daughter. I plan on this being assigned reading for her soon. Excellent themes and introduction of WWII for younger kids.

: Readers today are still fascinated by “Nat,” an eighteenth-century nautical wonder and mathematical wizard. Nathaniel Bowditch grew up in a sailor’s world—Salem in the early days, when tall-masted ships from foreign ports crowded the wharves. But Nat didn’t promise to have the makings of a sailor; he was too physically small. Nat may have been slight of build, but no one guessed that he had the persistence and determination to master sea navigation in the days when men sailed only by “log, lead, and lookout.” Nat’s long hours of study and observation, collected in his famous work, The American Practical Navigator (also known as the “Sailors’ Bible”), stunned the sailing community and made him a New England hero. *Challenge required reading.
Note from me: I loved the idea put forth in this book that you can learn anything. It’s a guiding principle of our homeschooling as well as my responses to life. Apply yourself and learn something new. Excellent.

Crispin: The Cross of Lead

: After being declared a “wolf’s head” by his manor’s corrupt steward for a crime he didn’t commit (meaning that anyone can kill him like a common animal–and collect a reward), this timid boy has to flee a tiny village that’s the only world he’s ever known. But before our protagonist escapes, Avi makes sure that we’re thoroughly briefed on the injustices of feudalism–the countless taxes cottars must pay, the constant violence, the inability of a flawed church to protect its parishioners, etc. Avi then folds in the book’s central mystery just as the boy is leaving: “Asta’s son,” as he’s always been known, learns from the village priest that his Christian name is Crispin, and that his parents’ origins–and fates–might be more perplexing than he ever imagined.

Providing plenty of period detail (appropriately gratuitous for the age group) and plenty of chase-scene suspense, Avi tells a good story, develops a couple of fairly compelling characters, and even manages to teach a little history lesson. (Fortunately, kids won’t realize that they’re learning about England’s peasant revolt of 1381 until it’s far too late.) *Challenge required reading.
Note from me: Would be a good read aloud for kids 10-14.

The Horse and His Boy

: On a desperate journey, two runaways meet and join forces. Though they are only looking to escape their harsh and narrow lives, they soon find themselves at the center of a terrible battle. It is a battle that will decide their fate and the fate of Narnia itself.The Horse and His Boy is the third book in C. S. Lewis’s classic fantasy series, which has been drawing readers of all ages into a magical land where horses talk and destiny awaits for over sixty years.
Note from Madison: 4 out of 5 stars. Good, but not as good as the other two Narnia books she’s read.

Kirsten Learns a Lesson : Kirsten starts school in America, but she doesn’t speak English very well. Miss Winston, her new teacher, is strict and not very understanding. Things get worse when Miss Winston comes to live with the Larson family. Kirsten’s only escape is playing with her secret friend, Singing Bird. When Singing Bird suggests running away forever, Kirsten must decide where she belongs. Kirsten does learn some important lessons in school, but she learns something even more important about herself.
Note from Madison:  Part of the American Girl Kirsten Series. Favorite part was when Kirsten meets Singing Bird.

Charlie and the Great Glass Elevator: Last seen flying through the sky in a giant elevator in Charlie and the Chocolate Factory, Charlie Bucket’s back for another adventure. When the giant elevator picks up speed, Charlie, Willy Wonka, and the gang are sent hurtling through space and time. Visiting the world’’ first space hotel, battling the dreaded Vermicious Knids, and saving the world are only a few stops along this remarkable, intergalactic joyride.
Note from Madison: An excellent book. 5 stars! Loved when they went through the atmosphere and sizzled the Knids!

When Stravinsky Met Nijinsky: Two Artists, Their Ballet, and One Extraordinary Riot

: The Russian artists Igor Stravinsky and Vaslav Nijinsky were popular in their time: Stravinsky for music, Nijinsky for dance. When their radically new ballet, The Rite of Spring, was first performed in Paris on May 29, 1913, the reaction was so polarized, there were fistfights and riots! Brilliant or disastrous, the performance marked the birth of modern music and dance. Stringer’s rhythmic text and gloriously inventive, color-rich paintings capture the wild and imaginative collaboration of composer and choreographer. The fascinating author note includes photos of the dynamic duo and The Rite of Spring dancers.
Note from Donovan: I like loud music and Rite of Spring is crazy loud.
Note from me: We learned about Rite of Spring in CC this past year – this was another layering of that information.

: Dive down beneath the waves and catch a glimpse at some of nature?s greatest predators. Discover Sharks from QED is the perfect introduction to sharks. Check out the super strength of the Great White, the taunting taste buds of the Tiger shark, the bizarre head shape of the Hammerhead and the human-friendly nature of the Whale shark.
Note from Donovan: This book has interesting information and shows the real size of a Great White Shark’s tooth.

: Gerald the giraffe doesn’t really have delusions of grandeur. He just wants to dance. But his knees are crooked and his legs are thin, and all the other animals mock him when he approaches the dance floor at the annual Jungle Dance. “Hey, look at clumsy Gerald,” they sneer. “Oh, Gerald, you’re so weird.” Poor Gerald slinks away as the chimps cha-cha, rhinos rock ‘n’ roll, and warthogs waltz. But an encouraging word from an unlikely source shows this glum giraffe that those who are different “just need a different song,” and soon he is prancing and sashaying and boogying to moon music (with a cricket accompanist). In the vein of Rudolph the Red-Nosed Reindeer, Gerald’s fickle “friends” quickly decide he’s worthy of their attention again.
Note from Donovan: I like the cricket and when the giraffe finds his dance!